Koh Buck Song (family name: Koh) is a Singaporean brand adviser and the author and editor of more than 30 books, including one on Singapore’s country brand – Brand Singapore: Nation Branding In A World Disrupted By Covid-19 (third edition, 2021, with a Chinese translation published in China, 2012). He has advised foreign governments on building their nation brands, and has spoken extensively on country branding internationally, including in London, Oxford, Cambridge (Massachusetts), Chicago (Illinois), Phuentsholing (Bhutan), Tahiti, Tokyo, Shanghai and Melbourne.
An avid traveller, he has visited more than 80 countries and territories, from Antarctica to Zimbabwe. An artist of haiga, a modern interpretation of the 16thcentury Japanese art form of ink sketches combined with haiku poetry, he has held several exhibitions in Singapore and Laos. This book features a haiga artwork for each of the 13 countries visited. He read English at Cambridge University in the UK and has a master’s in public administration from Harvard Kennedy School, USA. As an adjunct editor at Singapore’s Centre for Liveable Cities, he has authored and edited reports on the annual World Cities Summit since 2014. Previously, he was a columnist and political and arts journalist with Singapore’s main English daily The Straits Times, and head of global media relations and strategic planning at the Singapore Economic Development Board. As head of public affairs (Southeast Asia) with the communications consultancy Hill & Knowlton, he advised the Singapore government on many aspects of urban development, including the global launch of Gardens by the Bay and the National Gallery Singapore. 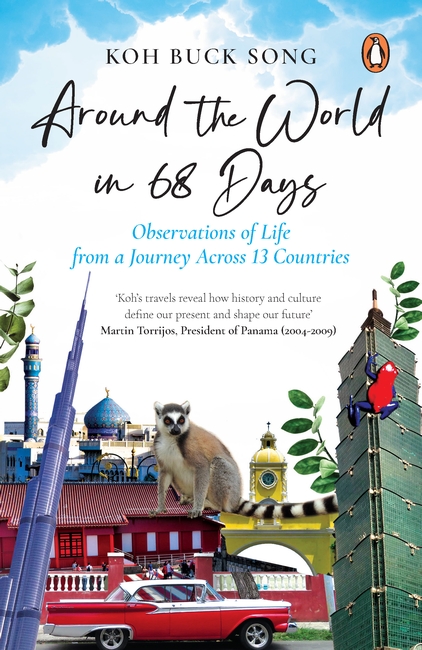 Around the World in 68 Days