Lope K. Santos was a Filipino Tagalog-language writer and former senator of the Philippines. He is best known for his 1906 socialist novel, Banaag at Sikat and for his contributions for the development of Filipino grammar and Tagalog orthography.
Santos pursued law at the Academia de la Jurisprudencia then at Escuela Derecho de Manila (now Manila Law College Foundation) where he received Bachelor of Arts degree in 1912. In the late 1900s, Santos started writing his own newspaper Ang Kaliwanagan. This was also the time when socialism became an emerging idea in world ideology.
In 1903, Santos started publishing fragments of his first novel, Banaag at Sikat on his weekly labor magazine Muling Pagsilang (The Rebirth) and was completed in 1906. When published in book form, Santos’ Banaag at Sikat was then considered as the first socialist-oriented book in the Philippines which expounded principles of socialism and seek labor reforms from the government. The book was later made an inspiration for the assembly of the 1932 Socialist Party of the Philippines and then the 1946 group Hukbalahap.
In the early 1910s, he started his campaign on promoting a ‘national language for the Philippines’, where he organized various symposia, lectures and headed numerous departments for national language in leading Philippine universities. In 1910, he was elected as governor of the province of Rizal under the Nacionalista Party. In 1918, he was appointed as the first Filipino governor of the newly resurveyed Nueva Vizcaya until 1920. Consequently, he was elected to the 5th Philippine Legislature as senator of the twelfth senatorial district representing provinces having a majority of non-Christian population.
In 1940, Santos published the first grammar book of the ‘national language’, Balarila ng Wikang Pambansa (Grammar of the National Language) which was commissioned by the Surian ng Wikang Pambansa (SWF). The next year, he was appointed by President Manuel L. Quezon as director of SWF until 1946. When the Philippines became a member of the United Nations he was selected to translate the 1935 Constitution for UNESCO. He was also appointed to assist for the translation of inaugural addresses of presidents Jose P. Laurel and Manuel A. Roxas. 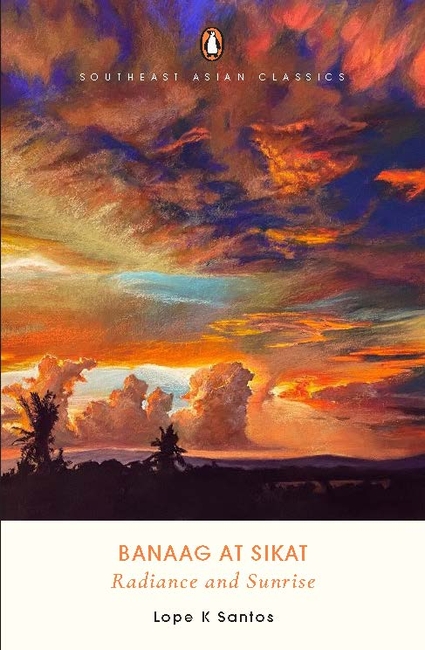 Banaag at Sikat (Radiance and Sunrise)